Ramps and Pathways: Play-based learning at its best! 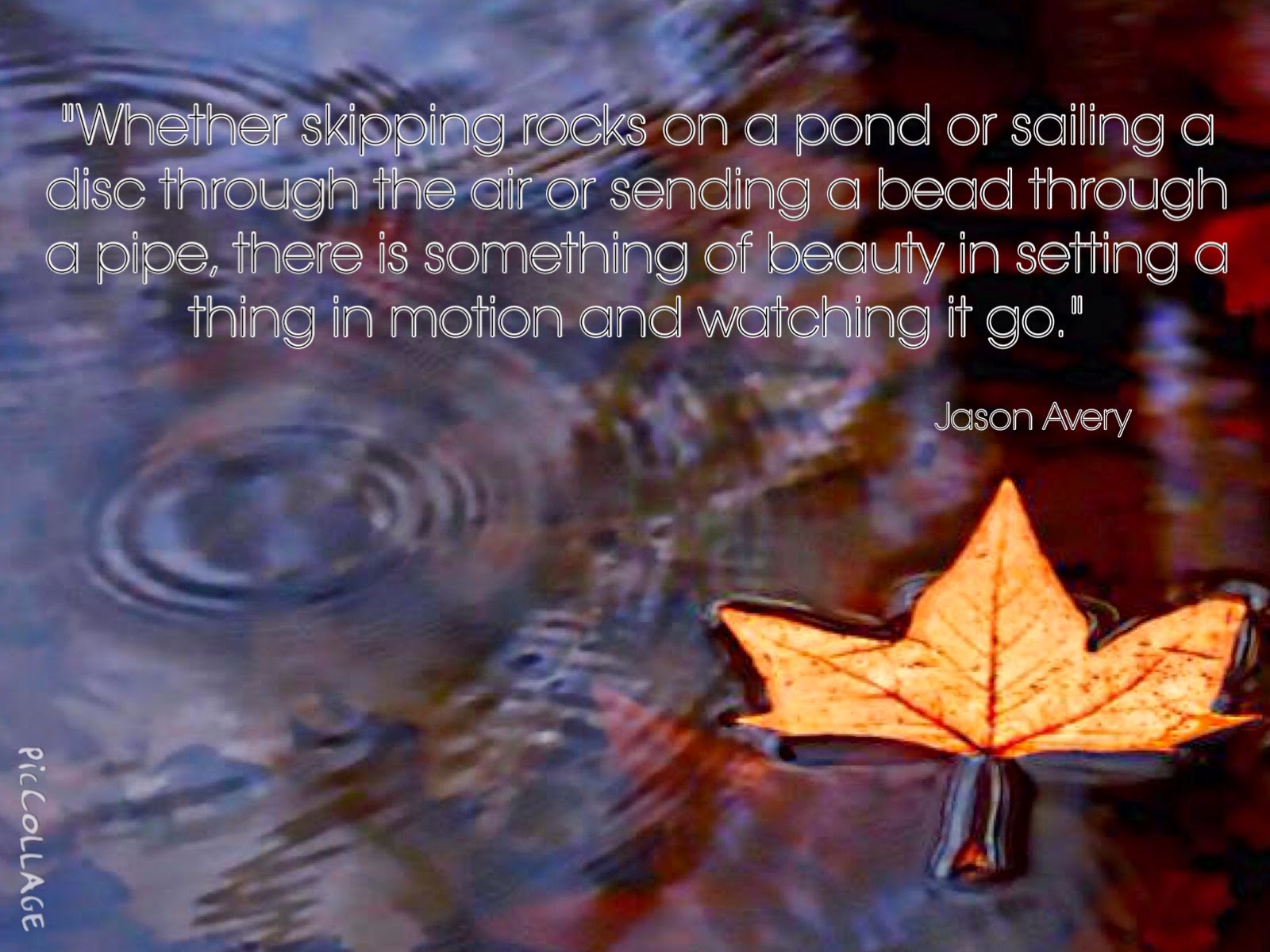 Before the March Break, my teaching partner and I started pondering and reflecting on some changes and new additions we wanted to make to the classroom. During our Tower Inquiry, we both noticed that many students enjoyed experimenting with stability and challenged themselves to see how tall or high they could build their structure before it fell down. We observed that rather than getting upset when their structures fell, they were excited by the way the items came tumbling down. Building structures and watching them fall became a daily experimental amusement. Having witnessed this, we wanted to introduce something that would allow for instant excitement with the element of experimentation!

It was around this time that I recently purchased an amazing book which I was planning to read over the summer, but for some reason started to flip through it one night. 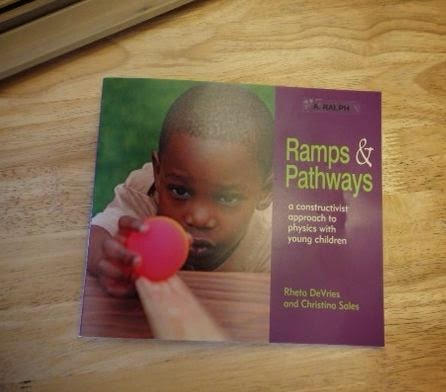 It turned out to be just what we were looking for to place in our class!

I found the following quote to be very powerful:

"According to Piaget, children learn by encountering problems they feel compelled to solve; experiencing emotions such as puzzlement, curiosity, surprise, and frustration; and engaging in the intellectual and emotional work of overcoming obstacles to solving those compelling problems. It is through this process that children make mental connections (mental relationships) that are the construction of knowledge or intelligence. The role of the constructivist educator, therefore, is to provide children with an environment that makes this process possible."  (Ramps & Pathways: a constructivist approach to physics with young children, pg. 23)

We wanted to give the students a lot of choice in their selection of materials. We decided on wooden marble run pieces, and some recyclable materials such as cove molding (had a hard time finding this, found at a specialty wood and trim store, so worth it!), stair balusters (Restore), cans, industrial packing cylinders, and regular paper rolls. We also put out various sized marbles, and metal and plastic balls (thanks to my engineer brother-in-law who provided me with the balls). Our hope was that students would create marble runs which would allow for experimentation producing instant reactions similar to the excitement of the tower structure falls!


Once the materials were placed, our initial observations revealed that the students were super excited to interact with them. They instantly started putting pieces together and creating pathways. I should mention that sometimes when we introduce new items at a certain learning area we take some time to view how the students are interacting with each other, what the learning looks like, and whether or not we need to intervene. In this case, though it was wonderful that so many students were interested in using the materials, our space did not support it. We could see that students were having a hard time moving around to access materials, build their pathways, and many structures sadly were disturbed. We decided to intervene and call a group meeting. We discussed the situation with the students and they were in agreement that they were frustrated and having a hard time creating what they wanted because people were in their way. They agreed that less people needed to work at the construction area and everyone should get a turn by switching everyday unless they need one extra day to finish. I truly believe that students need to experience a situation that may not be working to fully understand and be able to make changes. Had we intervened by placing a set number of students from the beginning, I'm not sure that they would have truly made the connection. 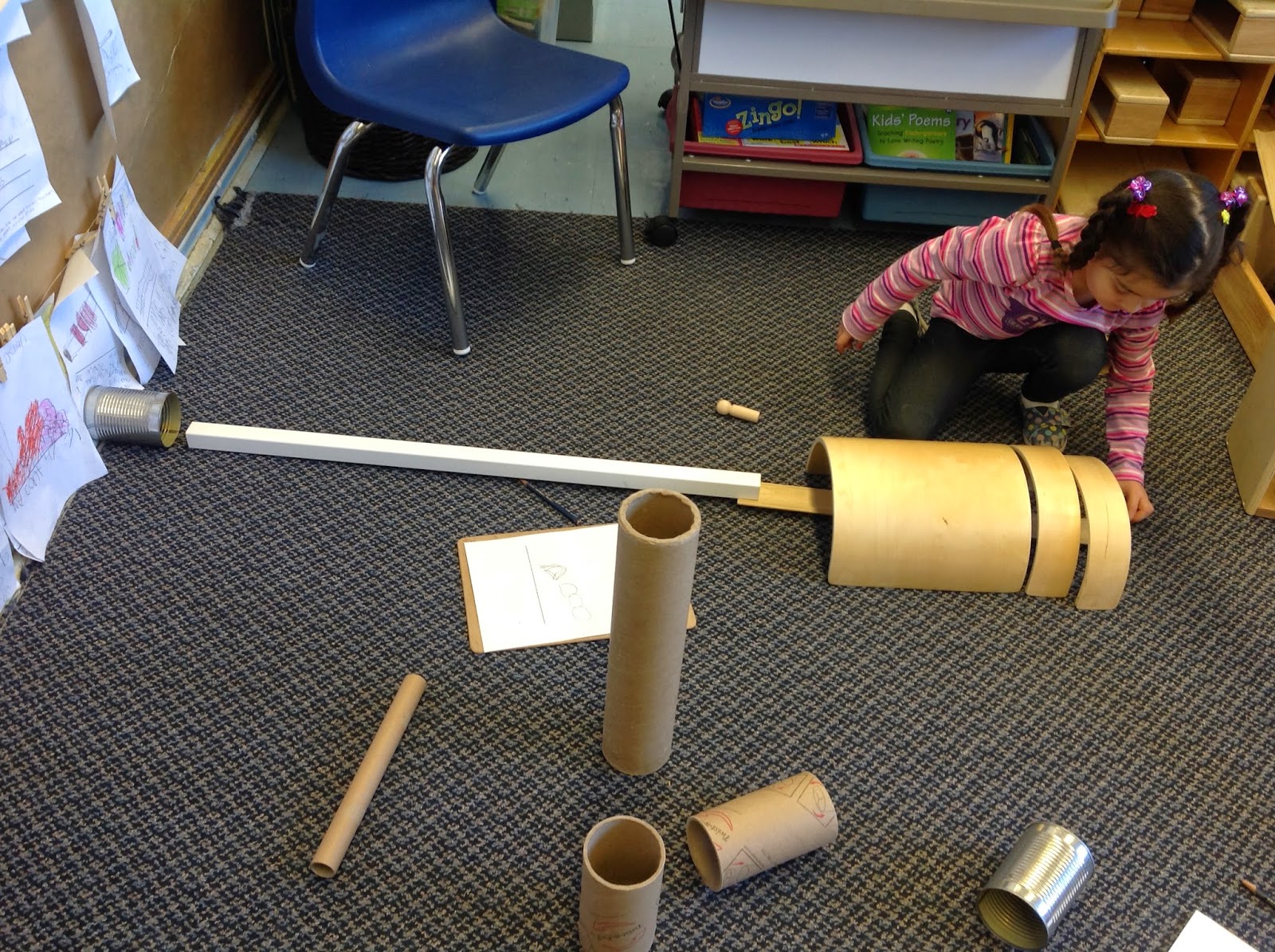 One morning I noticed that S. T. was working hard to create her marble run. She explored the use of many materials and took her time adjusting her pathways so that they were perfectly lined up. She then grabbed a marble and placed it at the end of the cove molding and gave it a push. The marble rolled and went into the can. She attempted this movement several more times.

Me: "What happens if you don't push the marble?"

She placed the marble on the cove molding.

Me: Do you think you can get your marble to move without you pushing it?"

I decided to give her some time to ponder my question. Still viewing her from across the room I noticed her watching another student's creation. She put away her materials, grabbed new ones and proceeded to create her first ramp. I was so proud of her as I watched he marble roll by itself into the can. She had a smile from ear to ear! 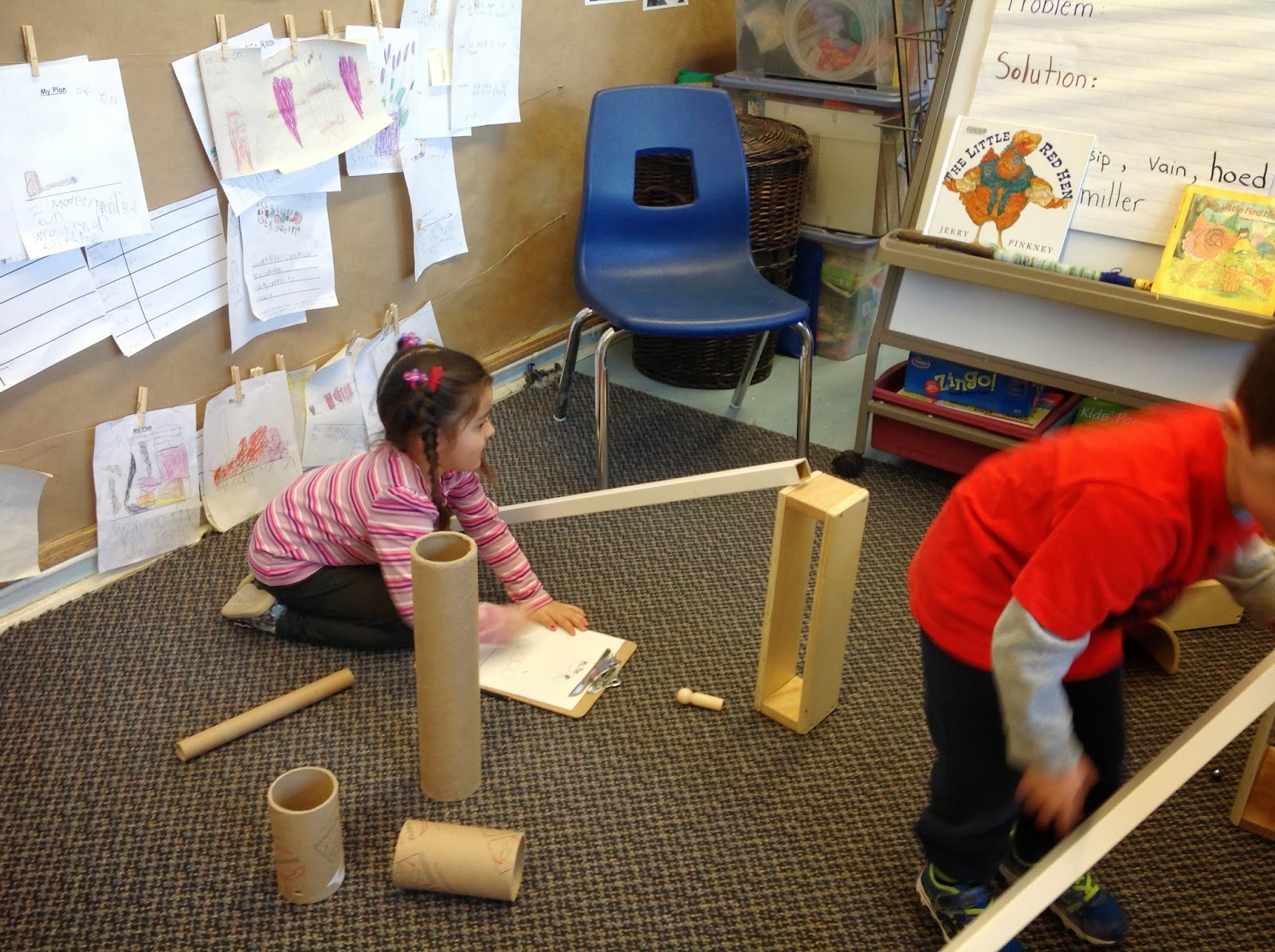 "When a teacher respects young children's unique thinking by giving them the chance to test and refine their incorrect ideas for themselves, they are more likely to go on to correct their misconceptions."
(Ramps & Pathways: a constructivist approach to physics with young children, pg. 16)

There are many variables (e.g. slope, supports, objects, connections, targets, and pathway designs) that students can make mental relationships with to further their learning knowledge of how objects move which is interrelated with increasing intelligence.
(Ramps & Pathways: a constructivist approach to physics with young children, pg. 39)

"A mental connection between ideas, created by the child to make sense out of his or her experience of how things work in the world."
Ramps & Pathways: a constructivist approach to physics with young children, pg. 24) 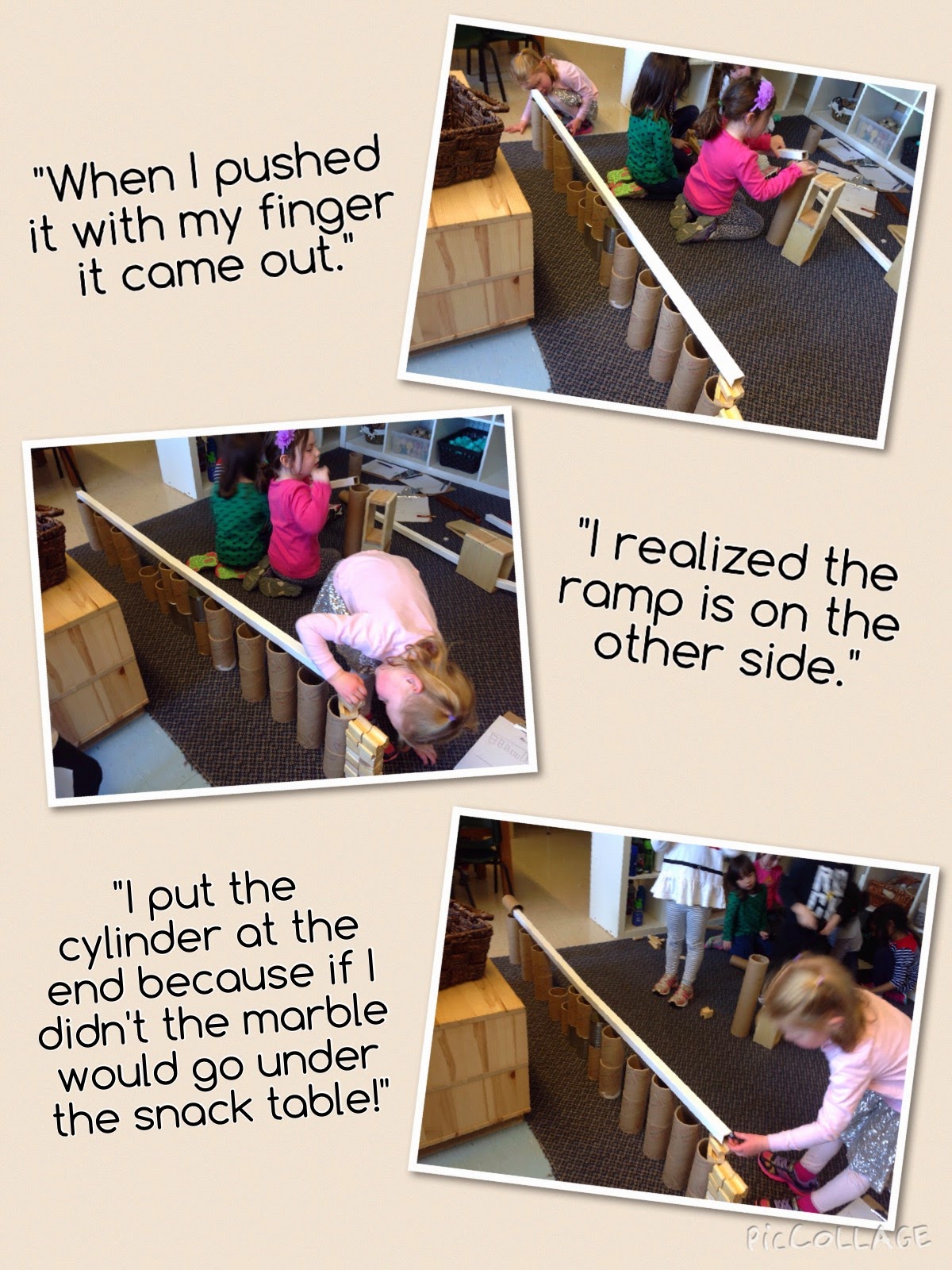 It was fascinating to listen and observe this group of girls as they tested out their marble run. They talked to each other, asked each other questions and wondered how to improve their structure. They had a dilemma, their marble kept rolling off the ramp and was not going onto the ramp as they wanted it to. 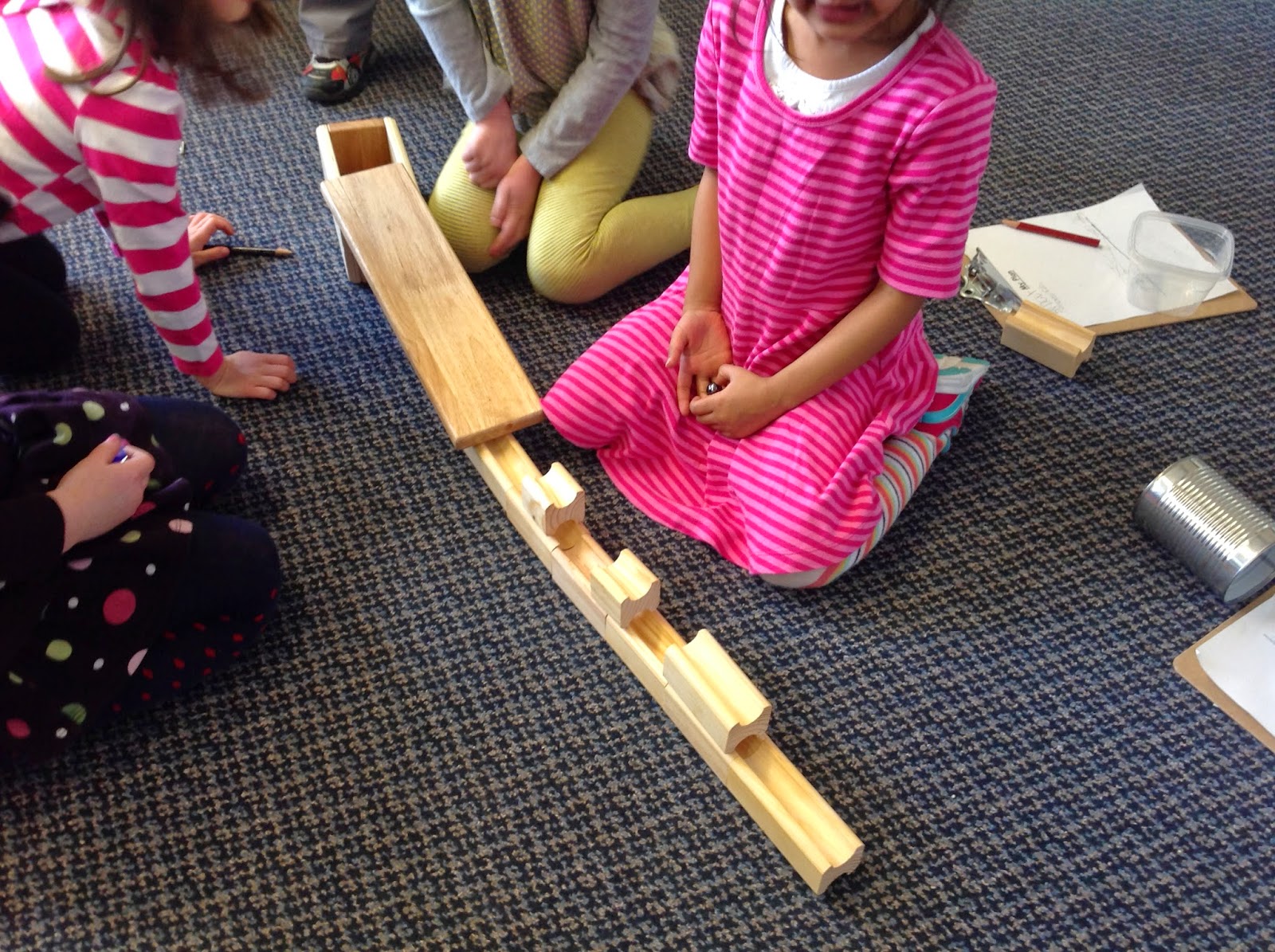 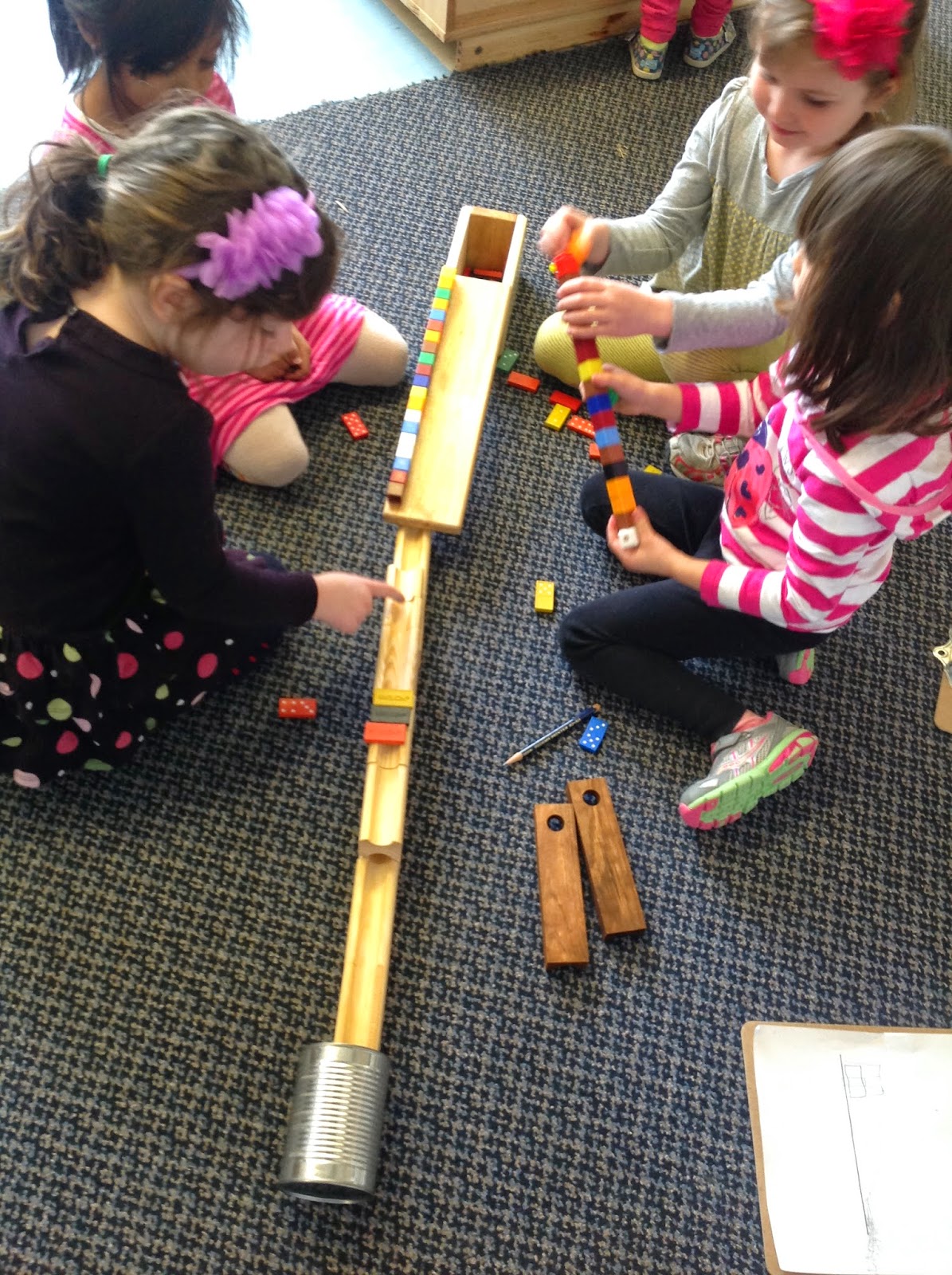 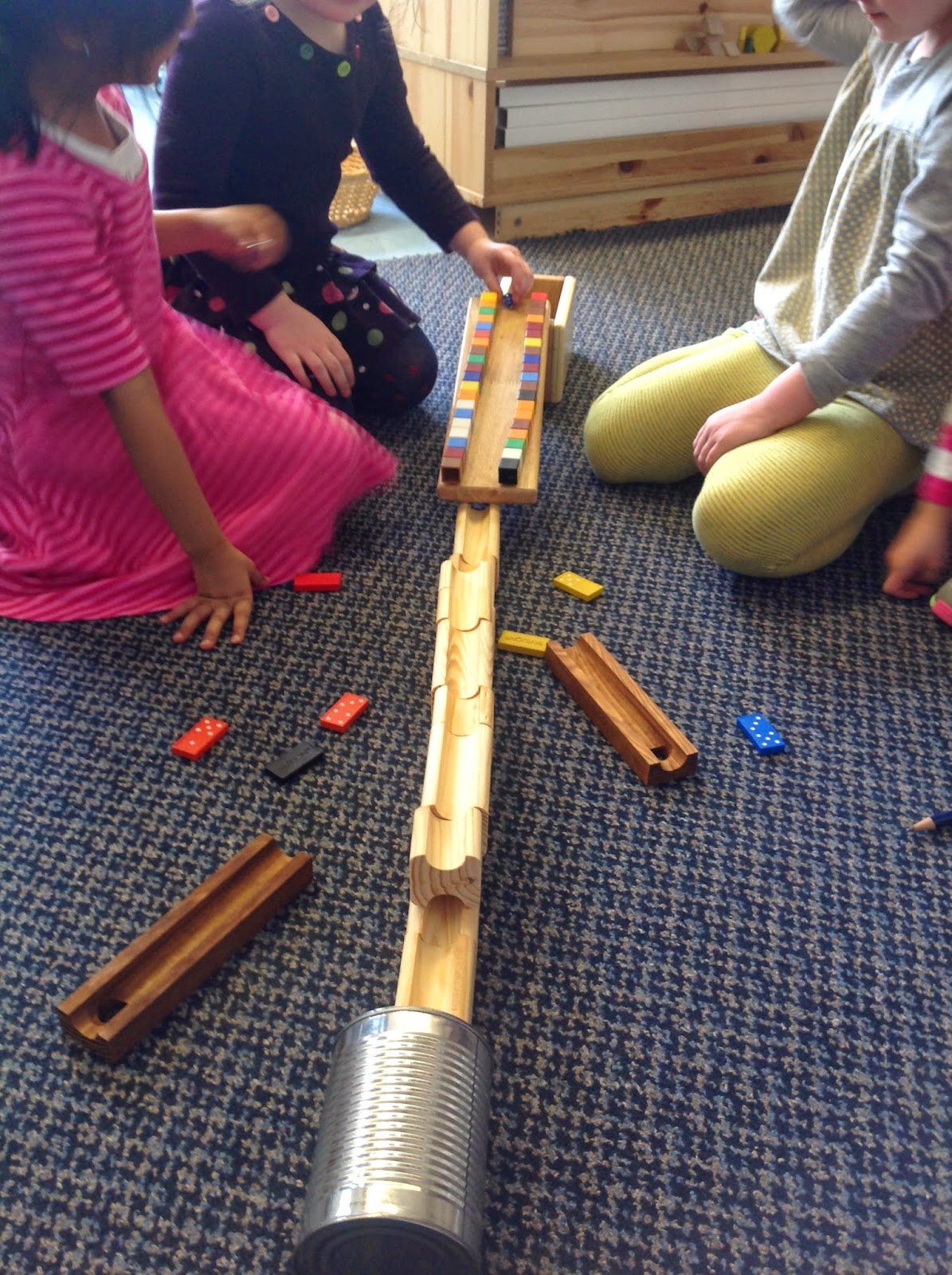 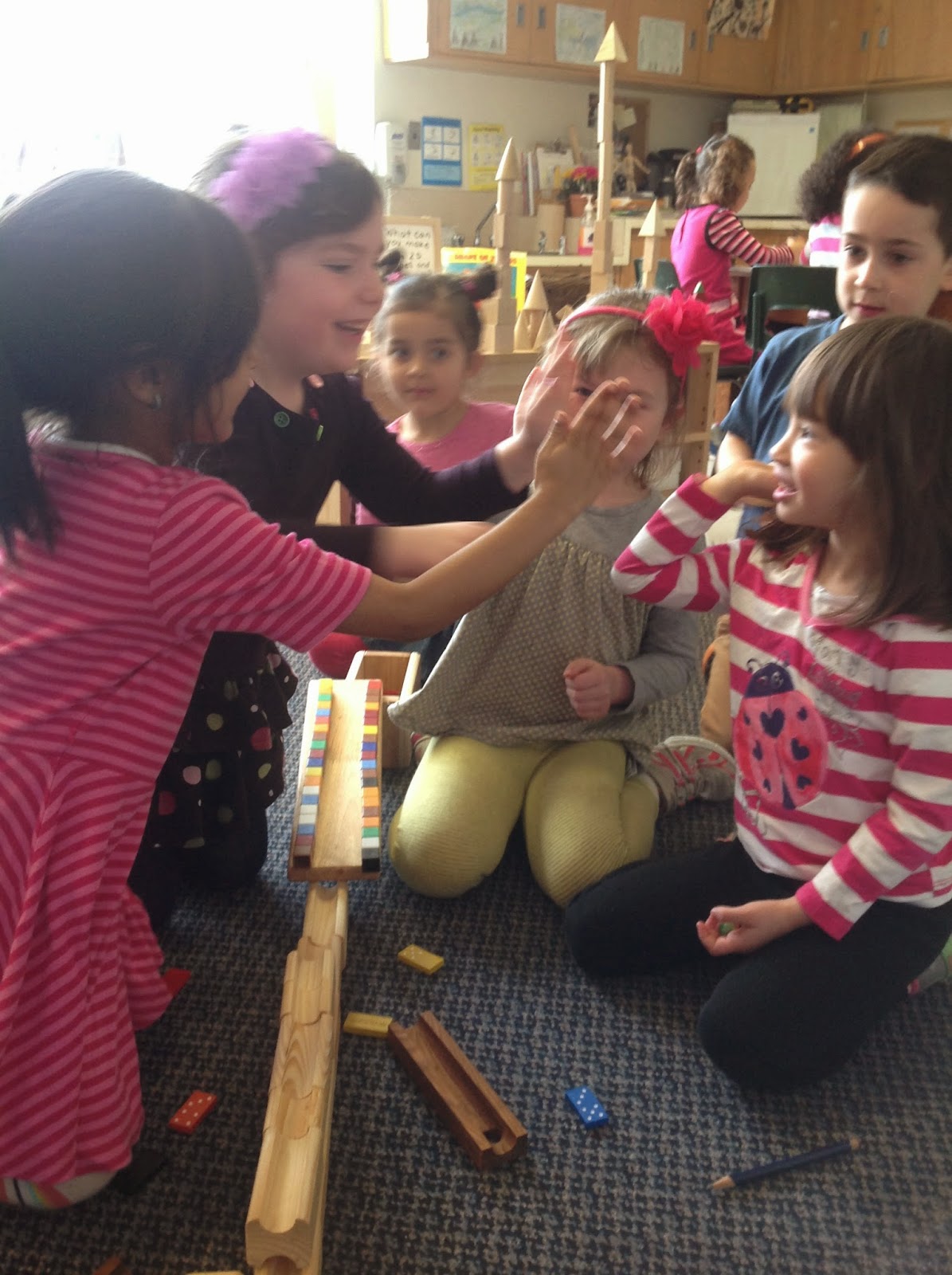 I feel so fortunate that I was able to capture this moment of joy, satisfaction, and camaraderie!

A few more students joined the group of girls and new ideas were tested. Targets (dominoes) were now placed at the end of the track. Experimenting slope, speed, and the movement of the marble were now being discussed! 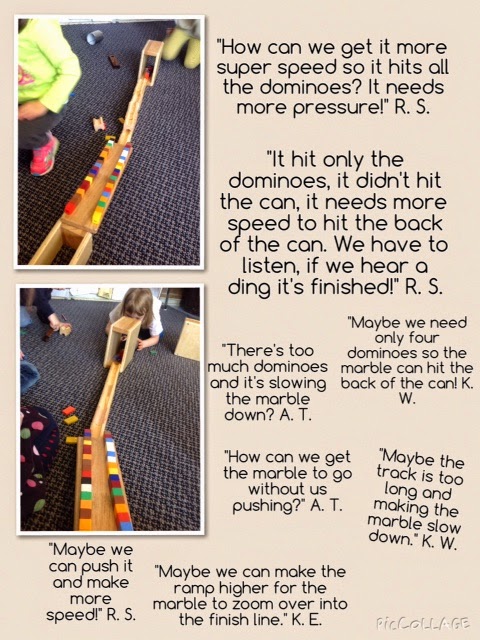 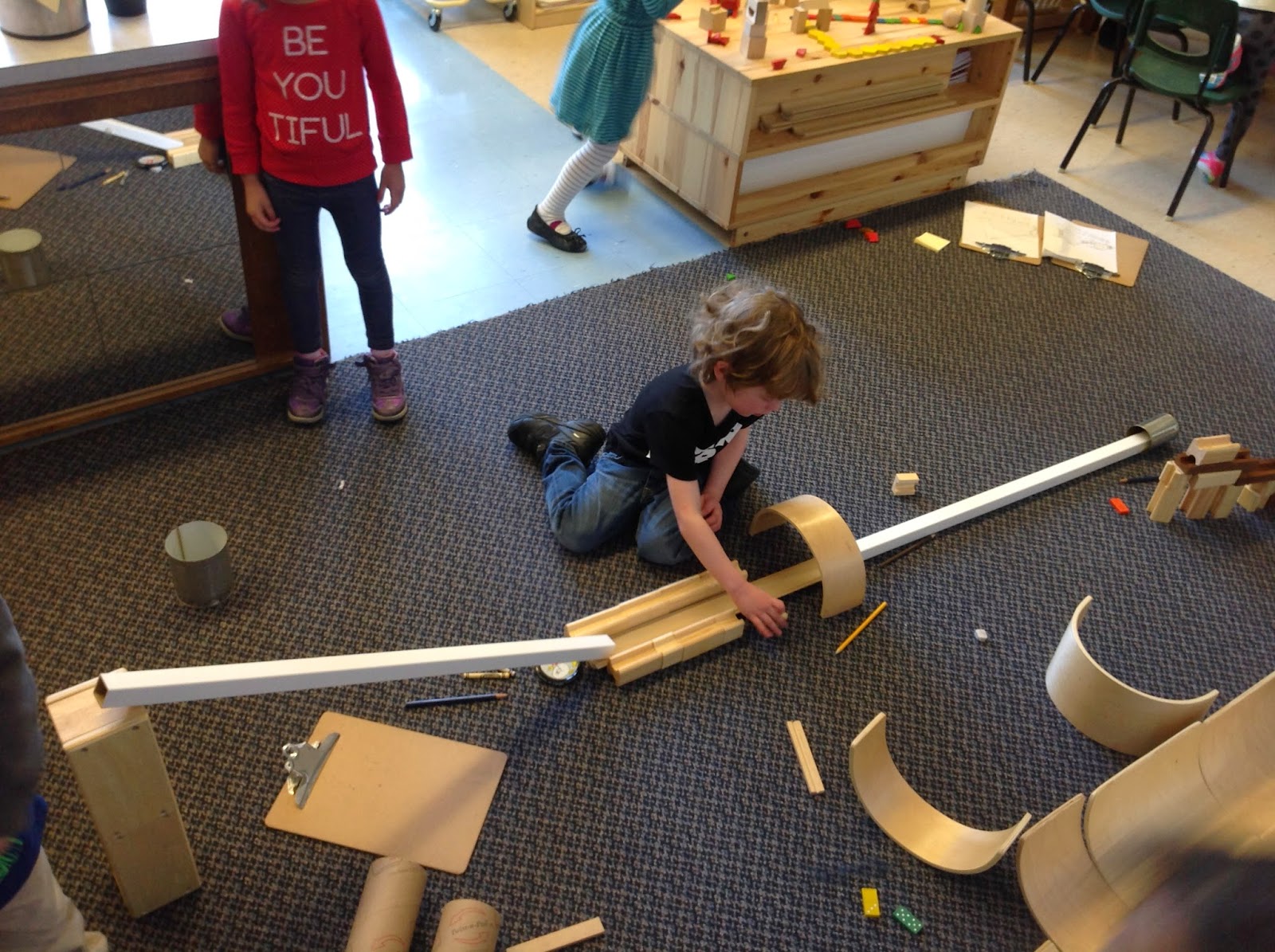 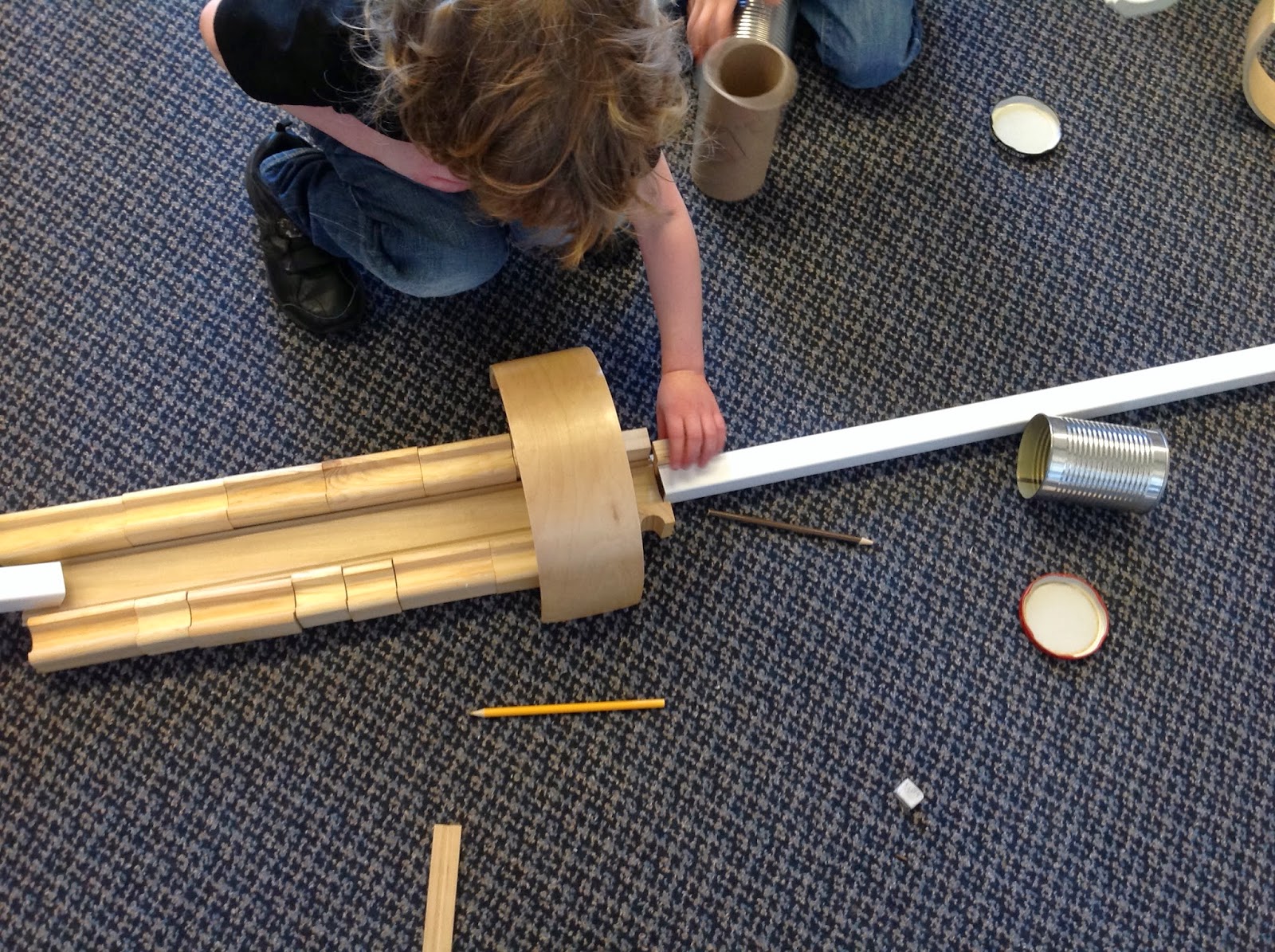 Creating pathways that made the ball change direction was also being experimented. Precision of the ramp height, pathway, and type of ball (wood, metal, plastic, glass) had to be just right so that the ball hit the can! 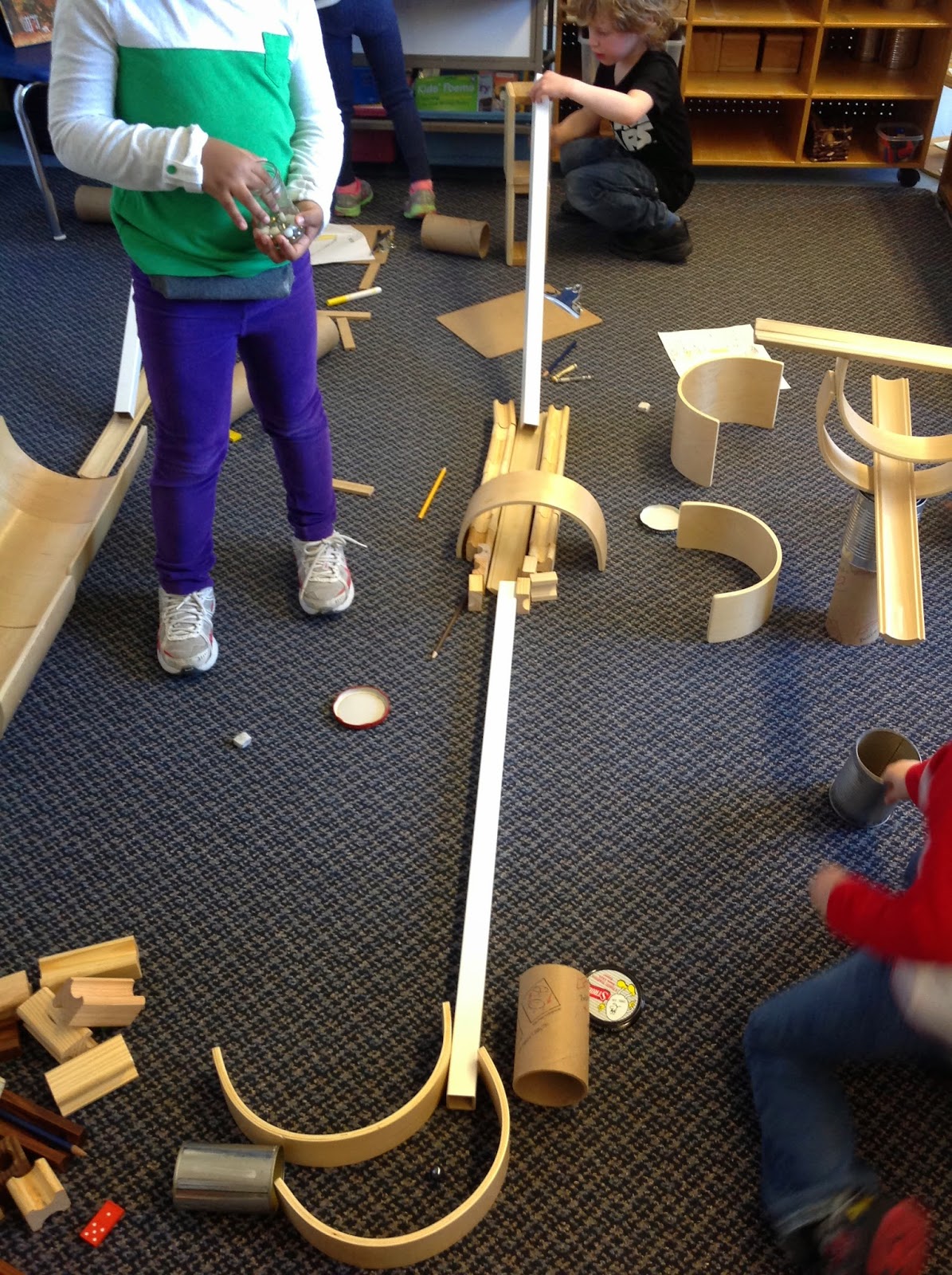 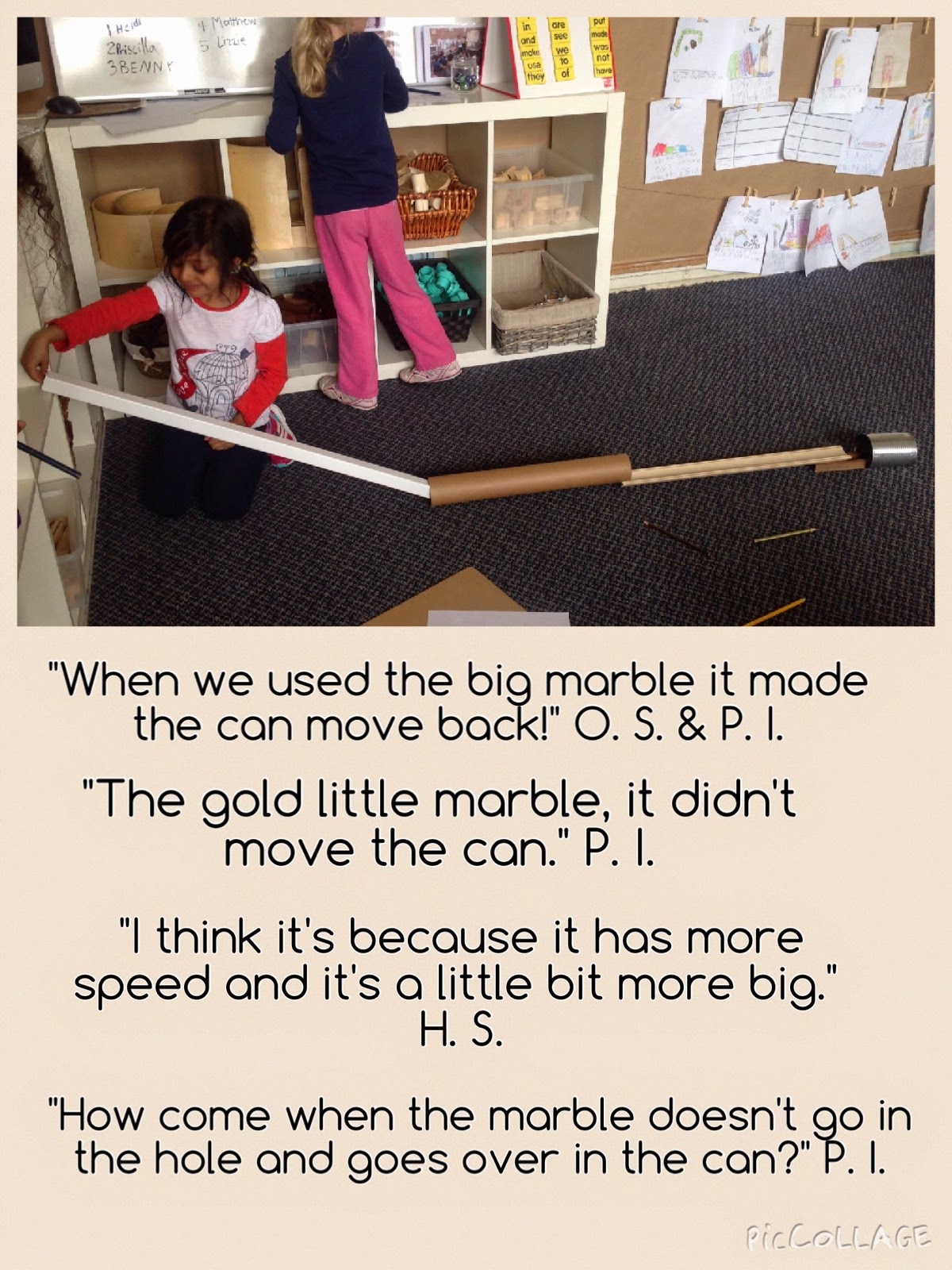 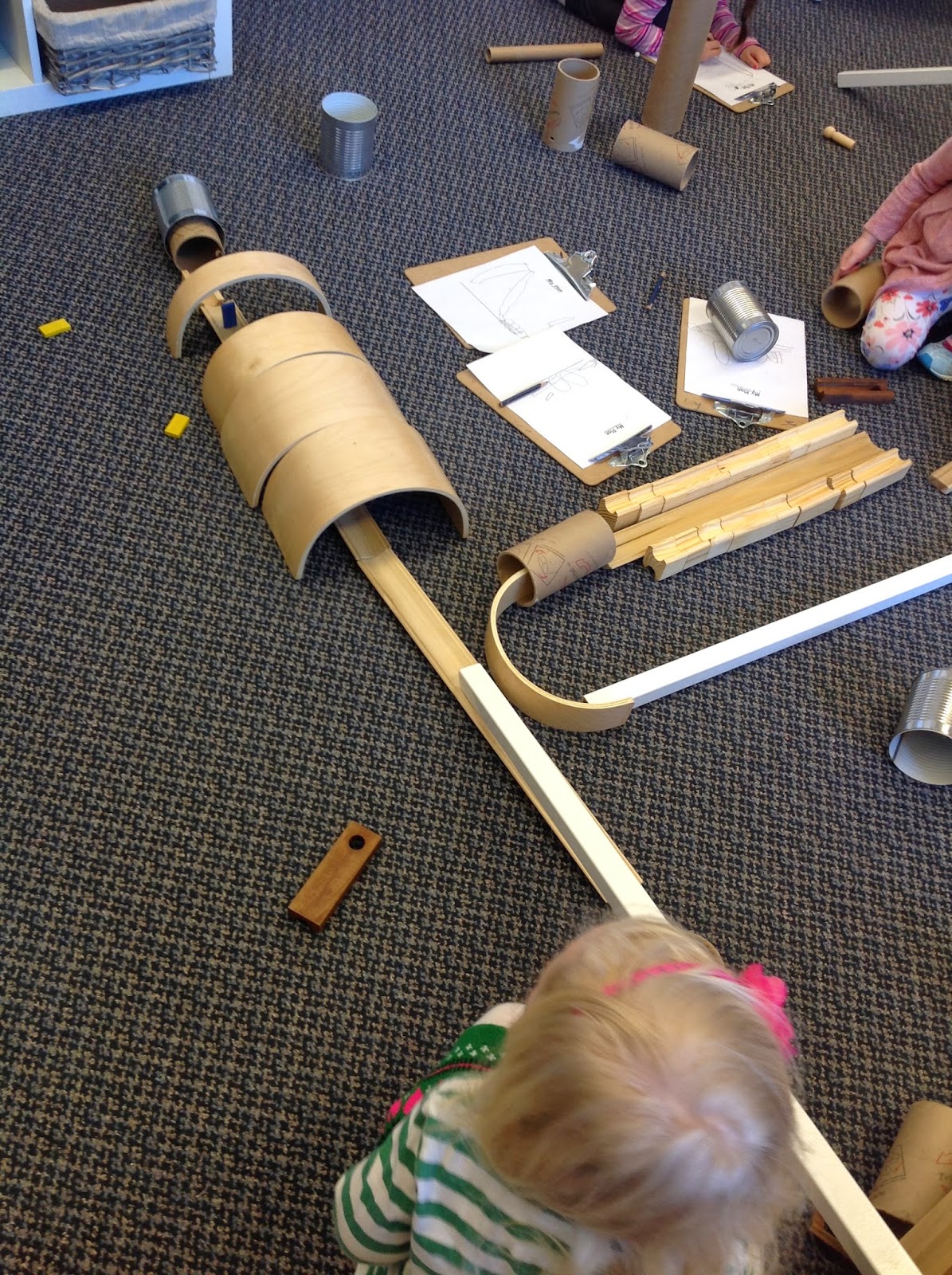 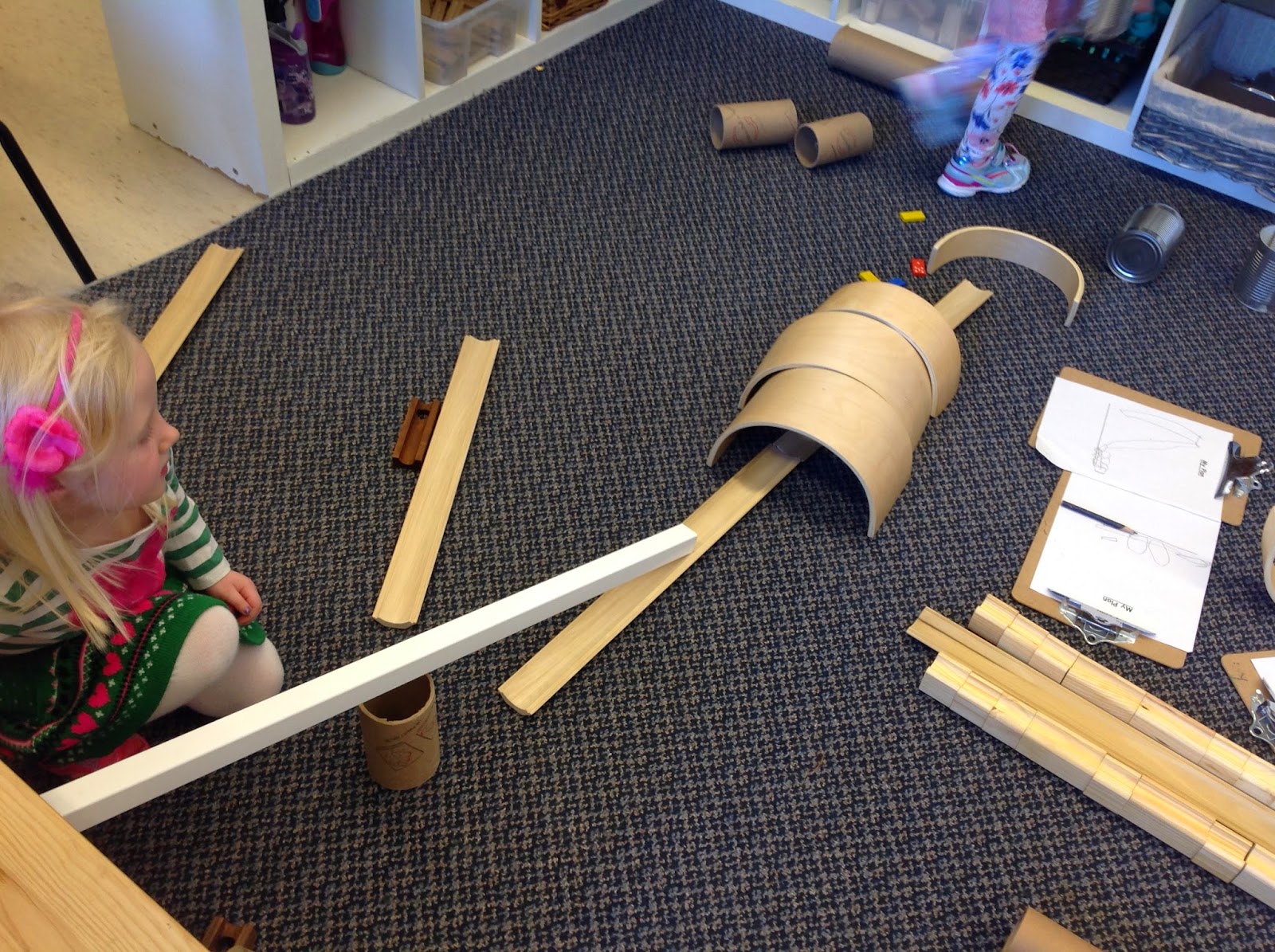 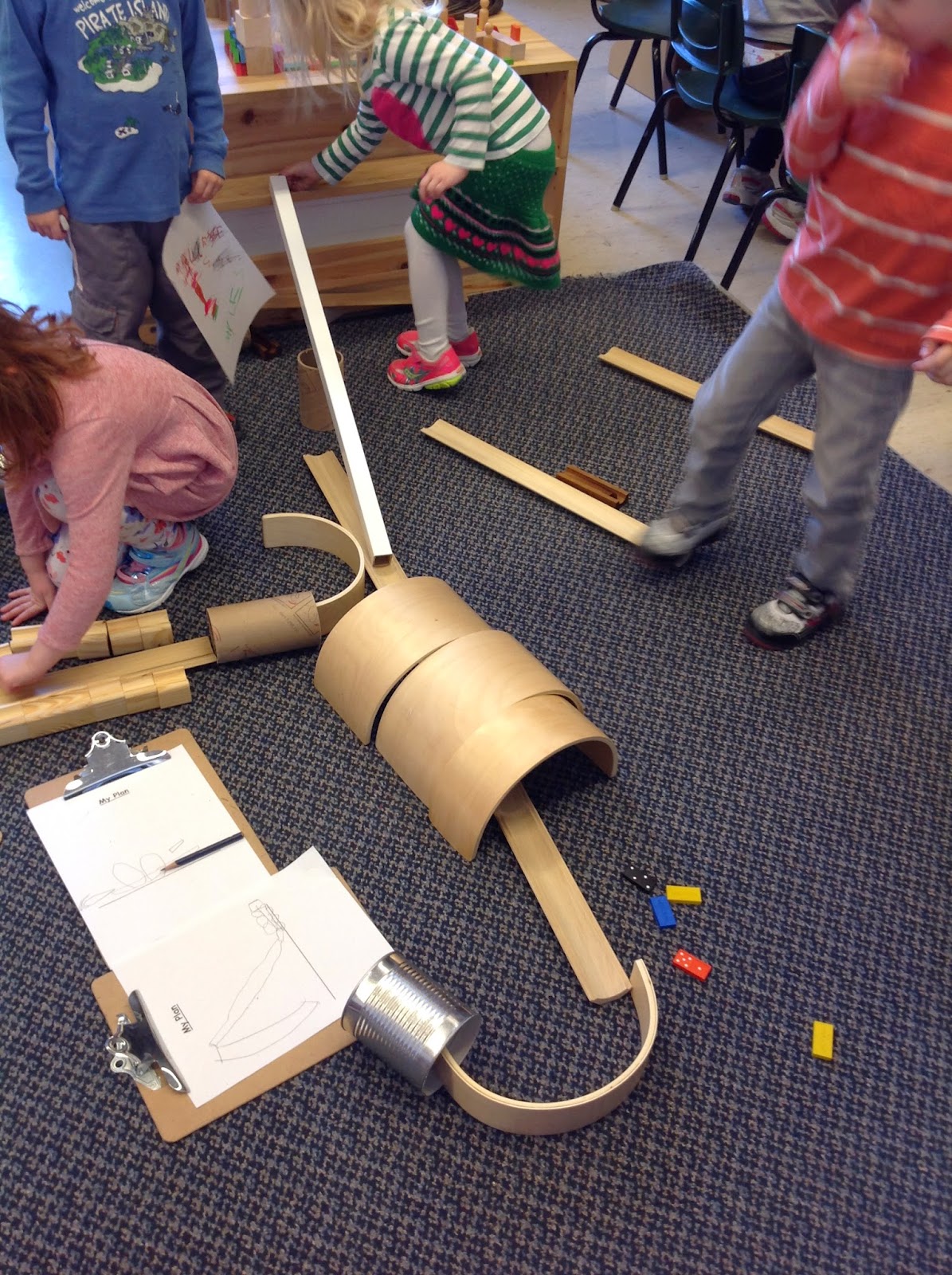 Below is a snippet of a conversation showcasing the thinking involved in creating parts of their marble run:

"Maybe if my tunnel is at a different level it will go in the tube!" J. S.

"Maybe if I use a different marble it will work. I am going to try the wood molding piece not the white tunnel (baluster)." J. S.

"Oh no! Now it's too fast, there are different weights of the marbles. The wooden one didn't go through but the marble did!" J. S.

Notice the different ramps they placed and modified after a few times of testing their marble run. They managed to get the ball in the can once but were unable to repeat the result. They continue to work on this design. 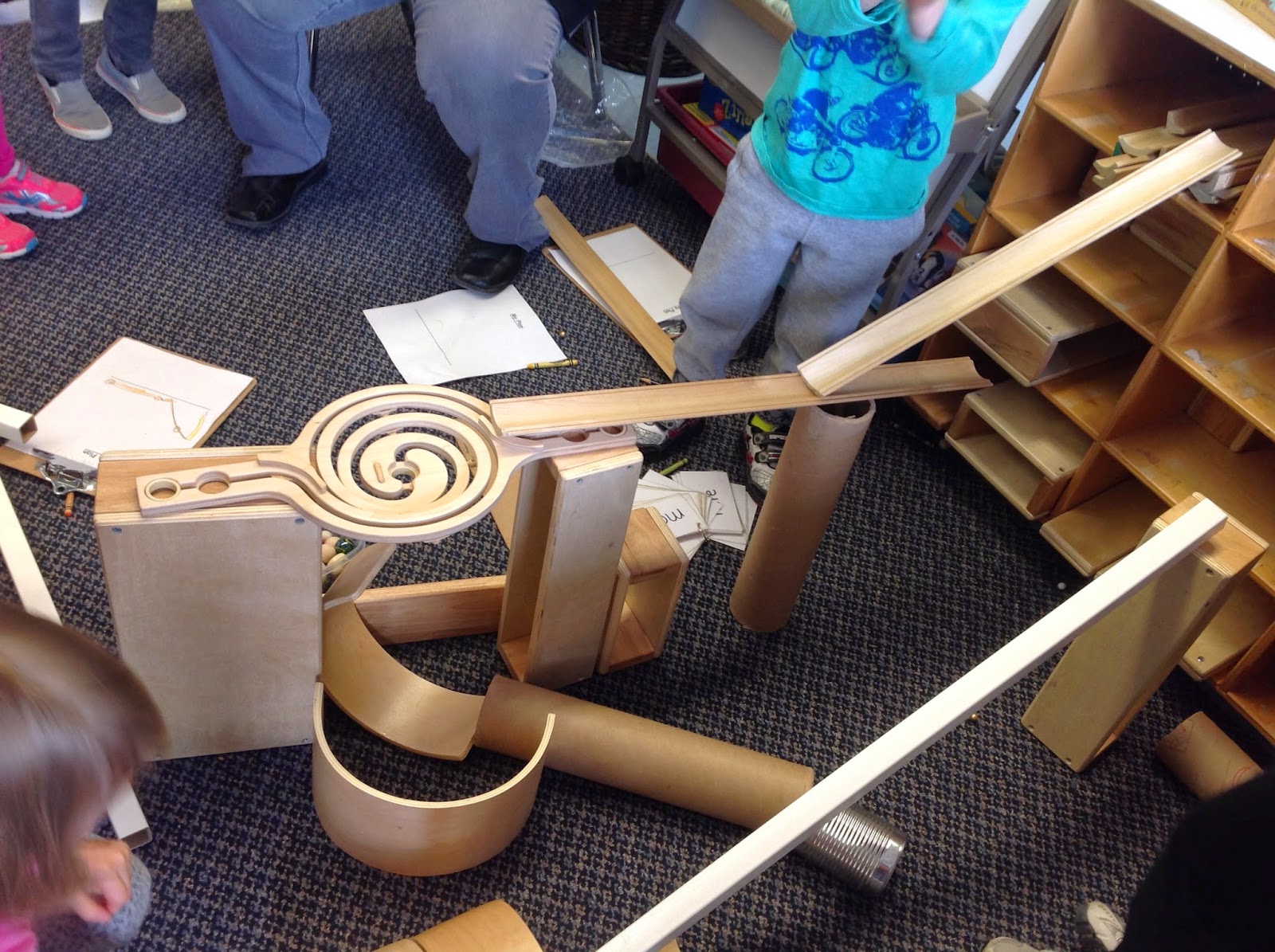 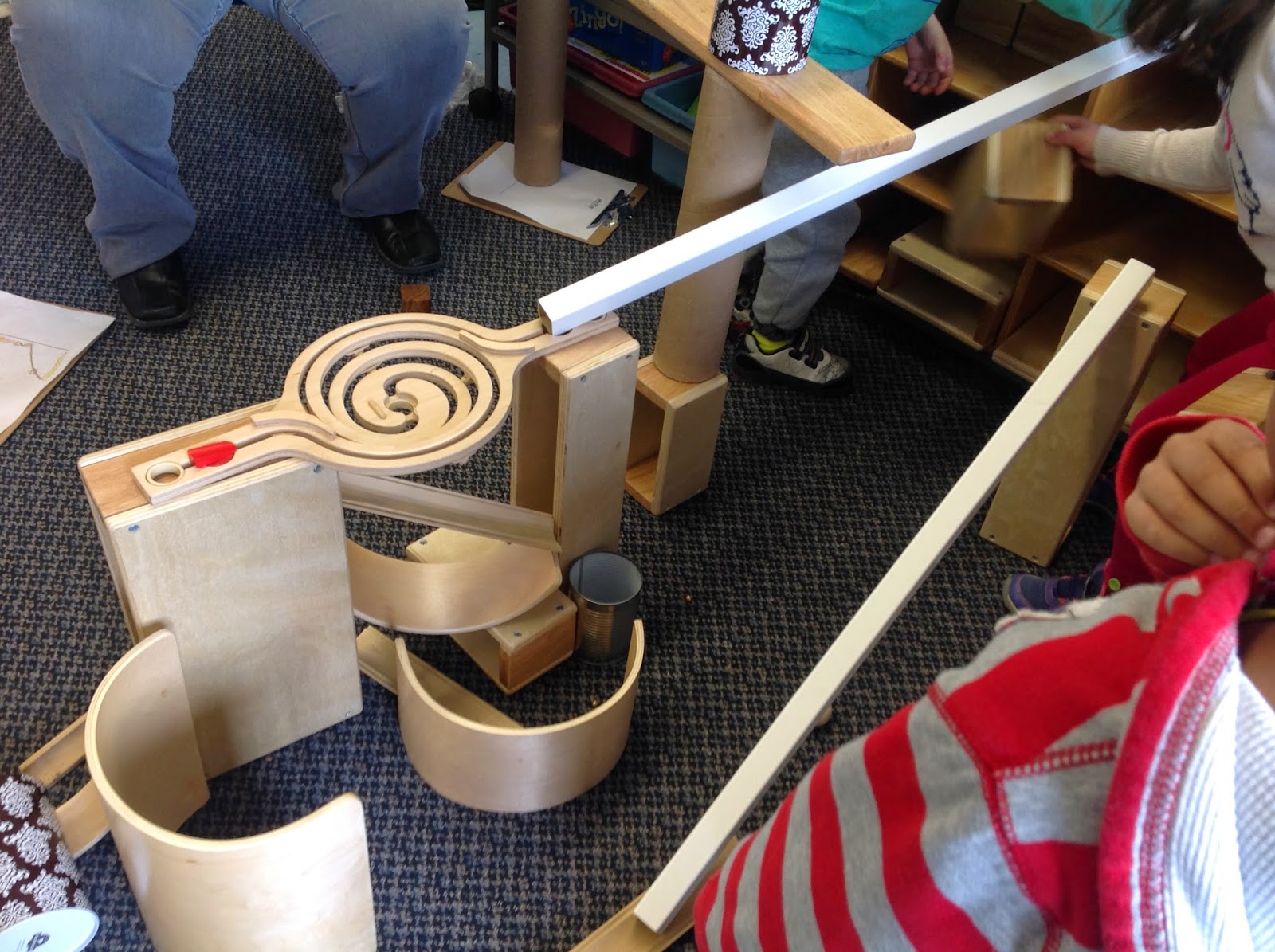 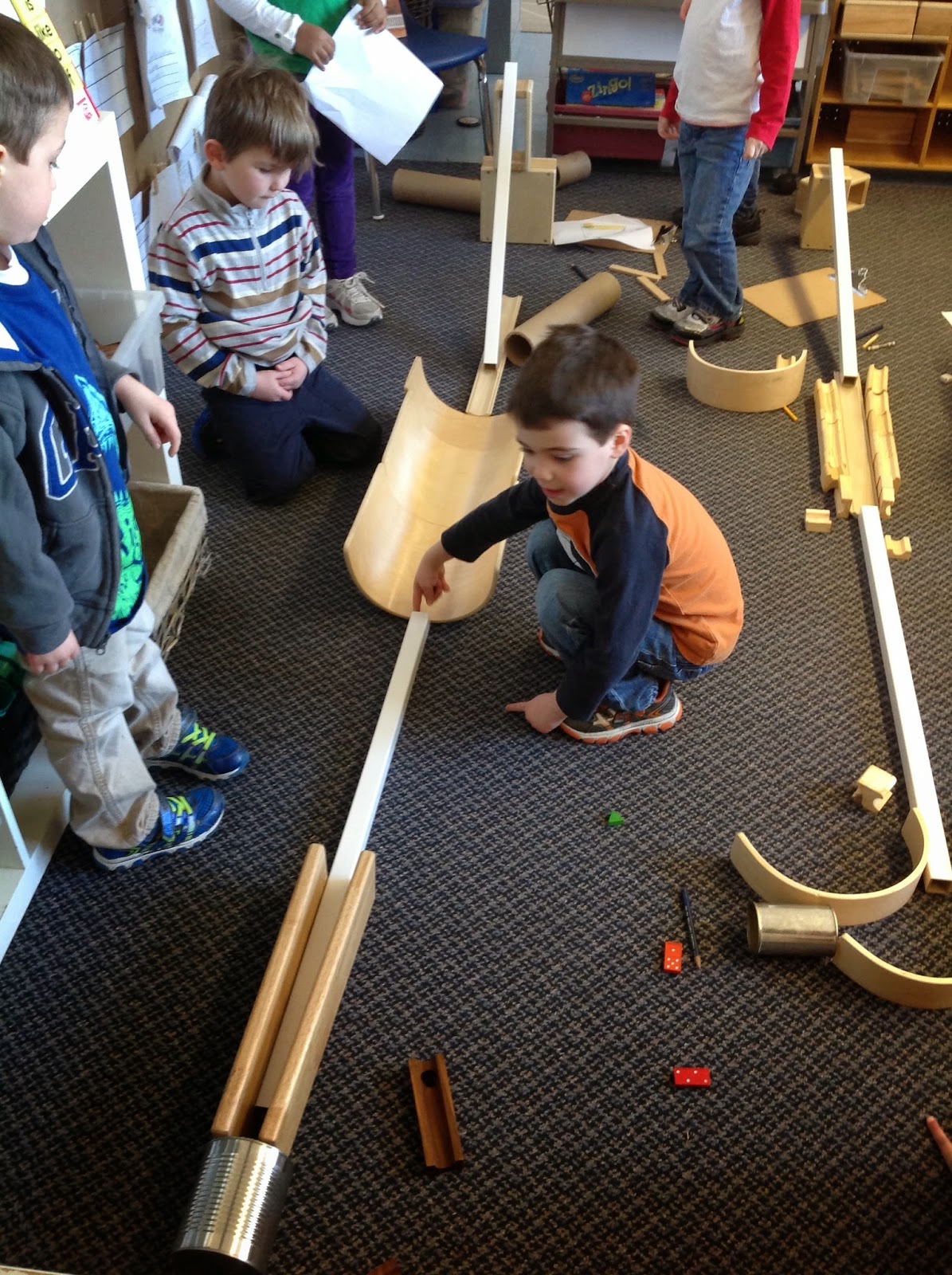 E. E. adjusting the baluster so that the ball travels smoothly through it in to the can. 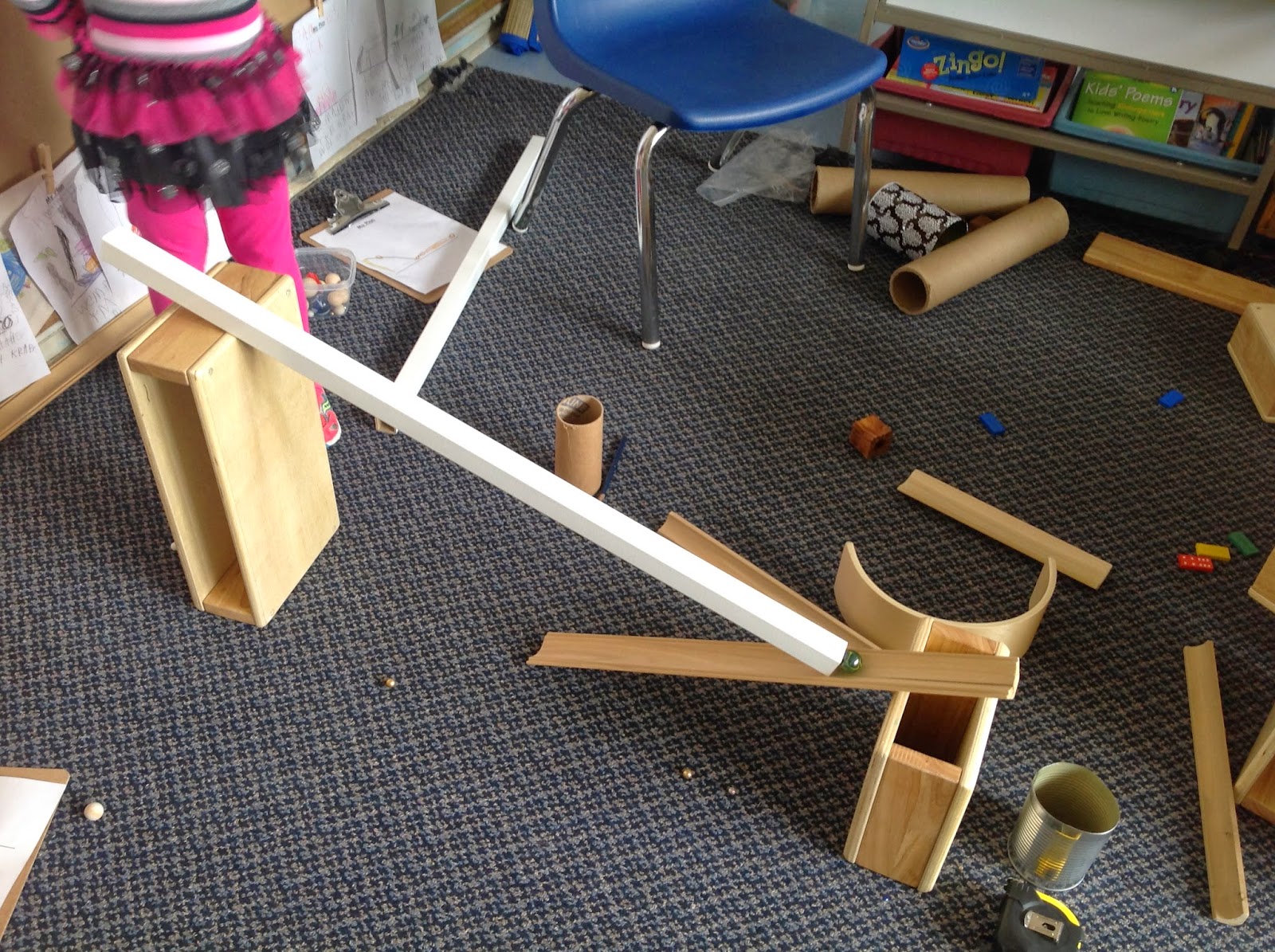 W. E. noticed that his marble kept going over the can instead of entering the can. After a few attempts, he made a revision by placing a few small blocks under the can to lift it up. He anticipated the marble going up, therefore he lifted the can up to catch the marble! 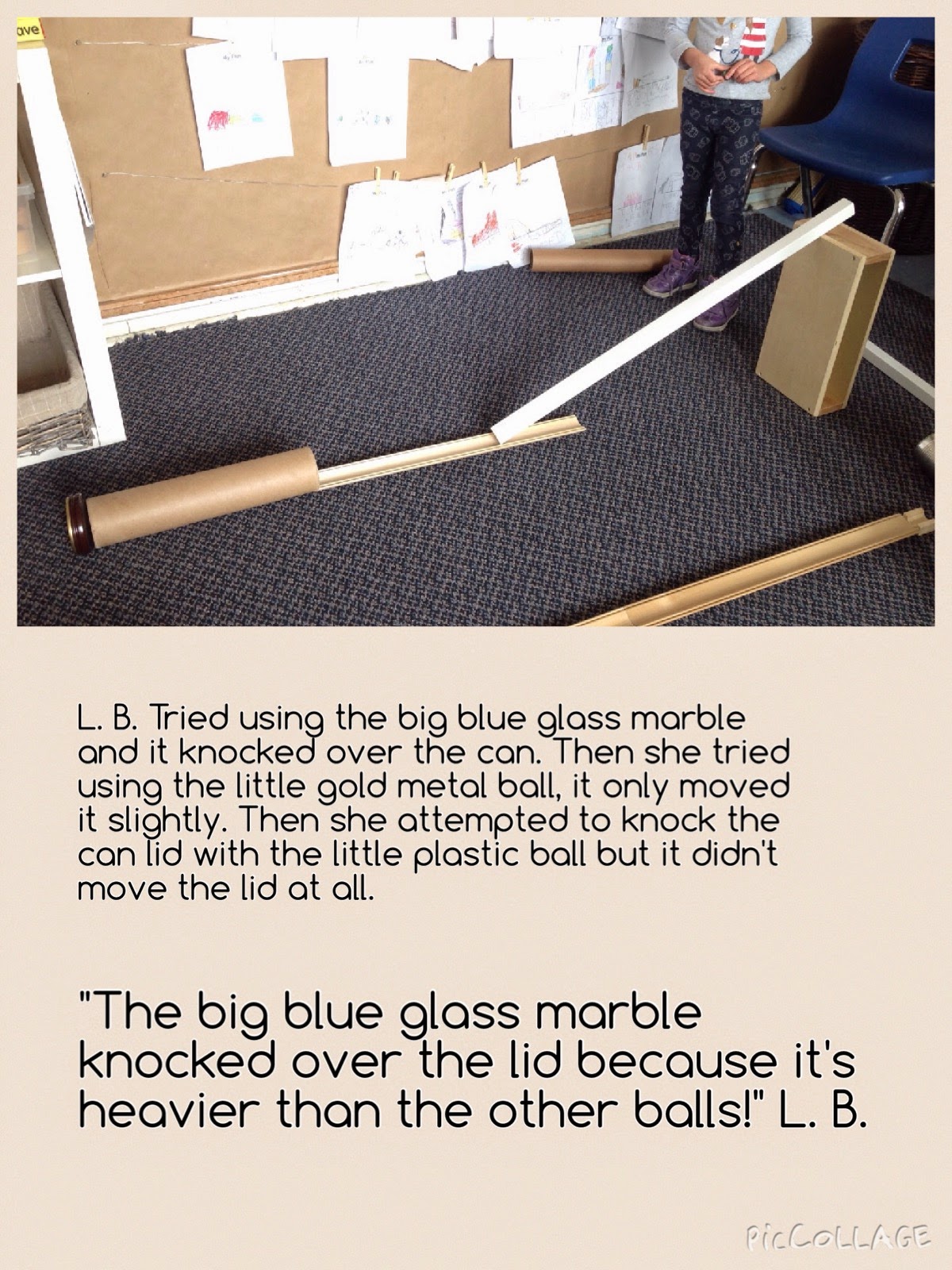 C. C. Also experimented using different balls. She found that the big and little glass marbles and the gold metal balls worked the best with staying on the path and hitting the can. When she tried the wooden and plastic balls, they kept rolling off the path!

"I think it's because they're too light and they keep flying off the cove molding!" C. C. 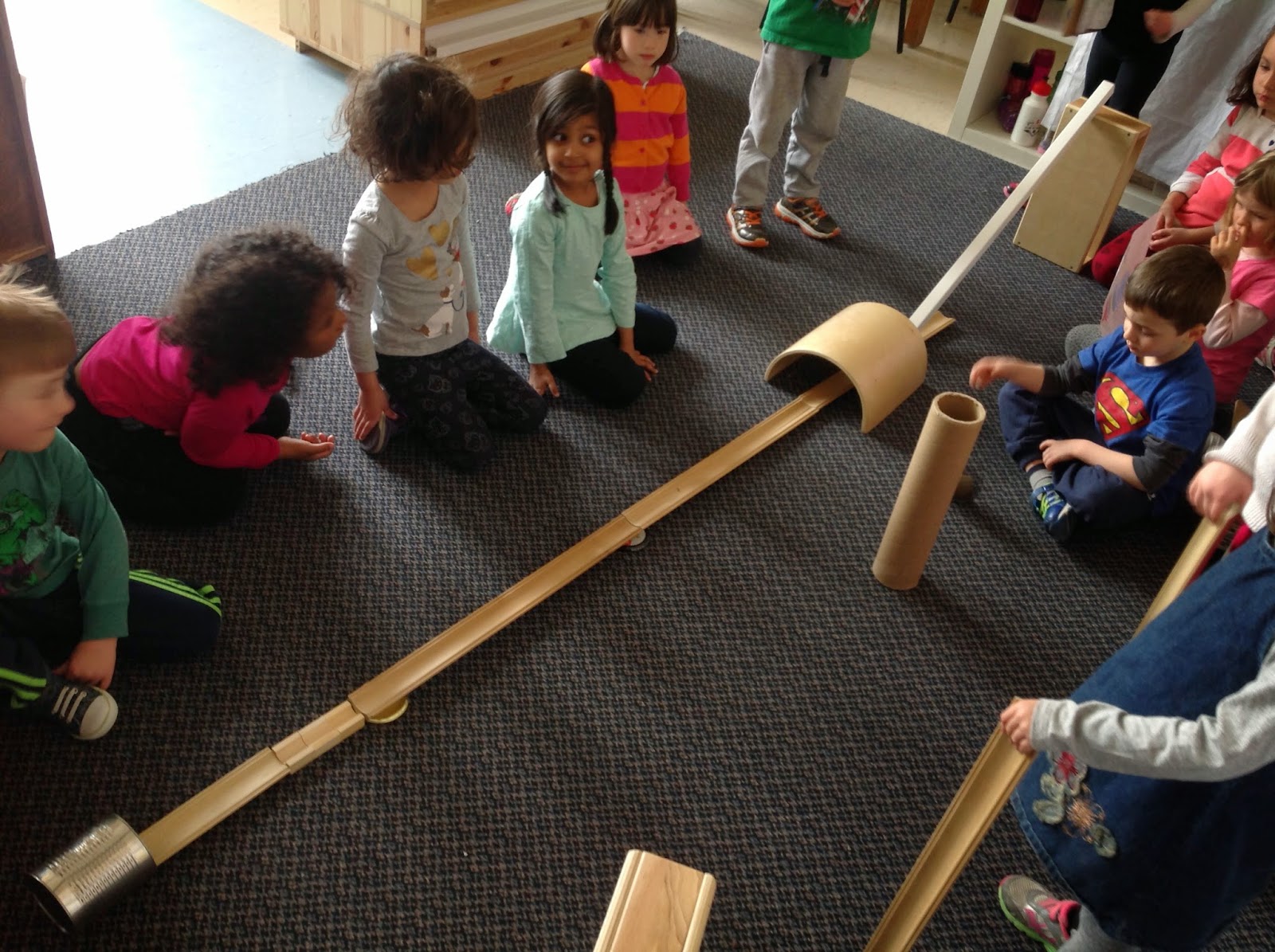 I saw this video from the kindergarten students at Thornwood Public School in the Peel District School Board. Their wonderful teachers, Laurel Fynes and Pooneh Haghjoo (Room 109), captured this video. They were experimenting with ramps and pathways and I was very excited to show the students their video because they were building in a way that we did not try yet.


Once the students saw the video, they were excited and inspired to try creating a marble run that enabled the ball to change directions! Below are some of their attempts. They worked tirelessly until they got it! 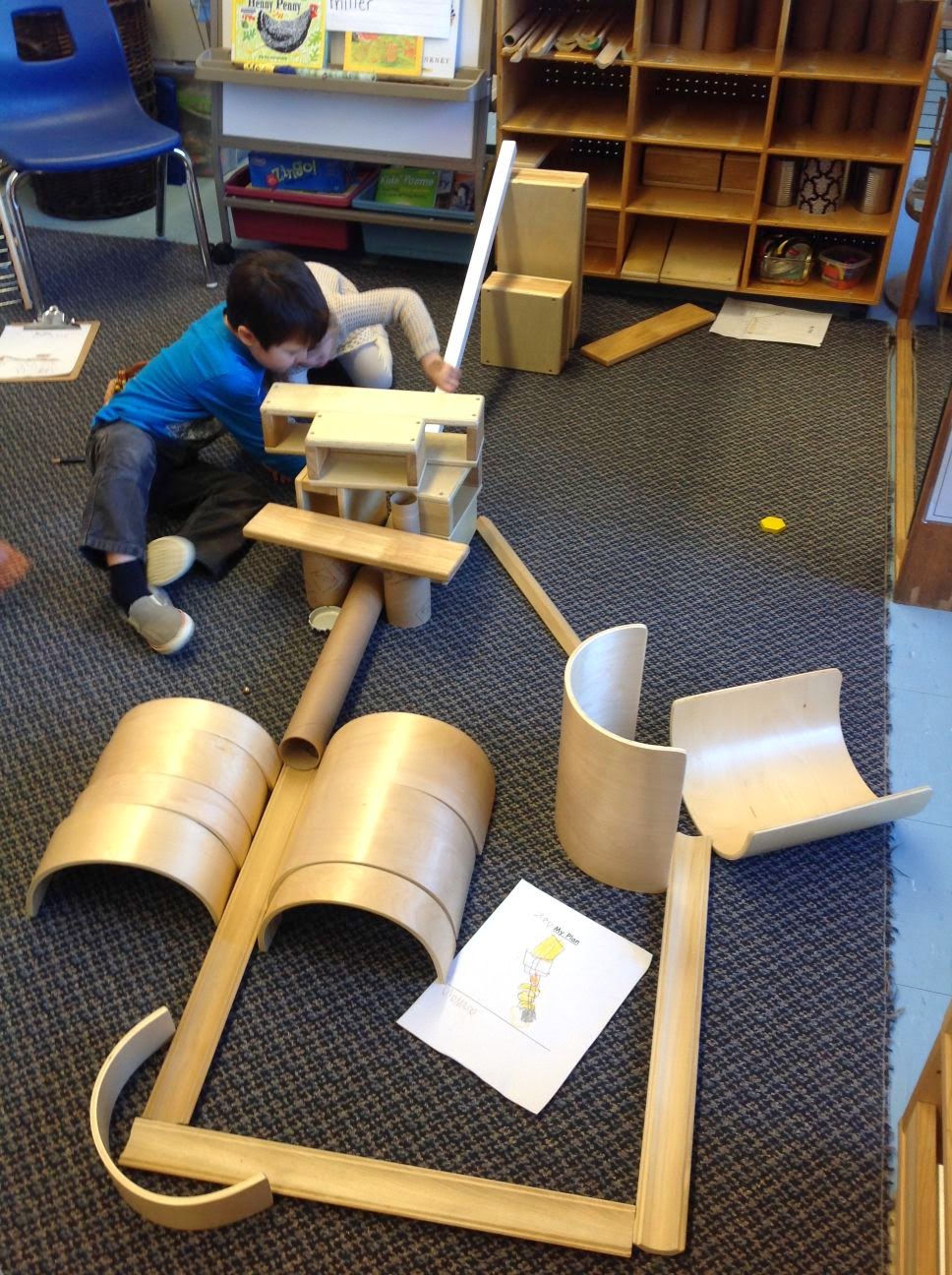 Beginning stages of the structure. Notice the way the cove molding is placed and touching. F. D., B. P., and Z. G. soon revised this plan since they saw that their balls were stopping before the first corner. 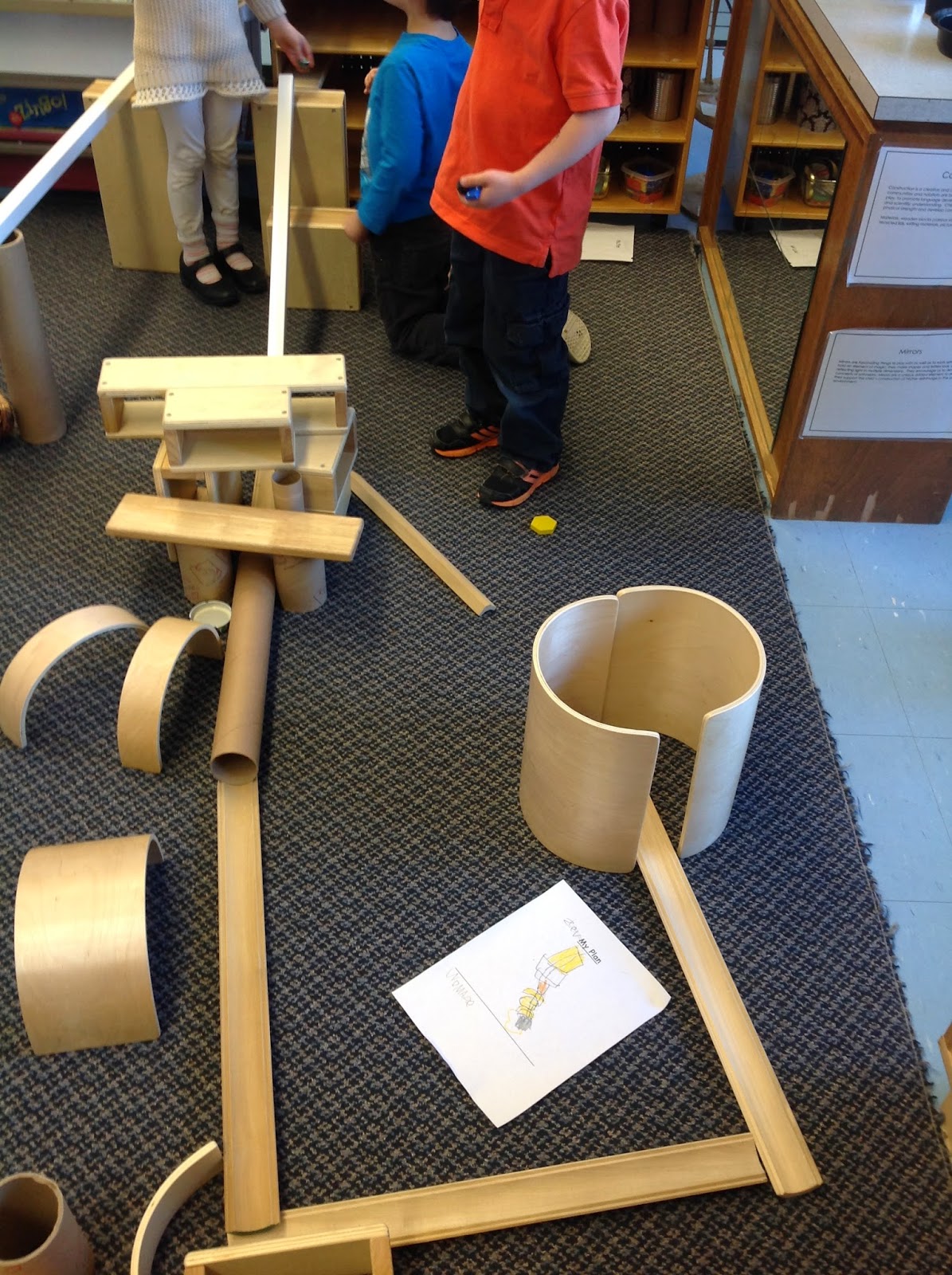 Their second attempt revealed the realization of lifting the first cove molding and placing it on the second so that the ball would roll smoothly. Once they tried a few times, they noticed that the ball still didn't make it past the fist corner. 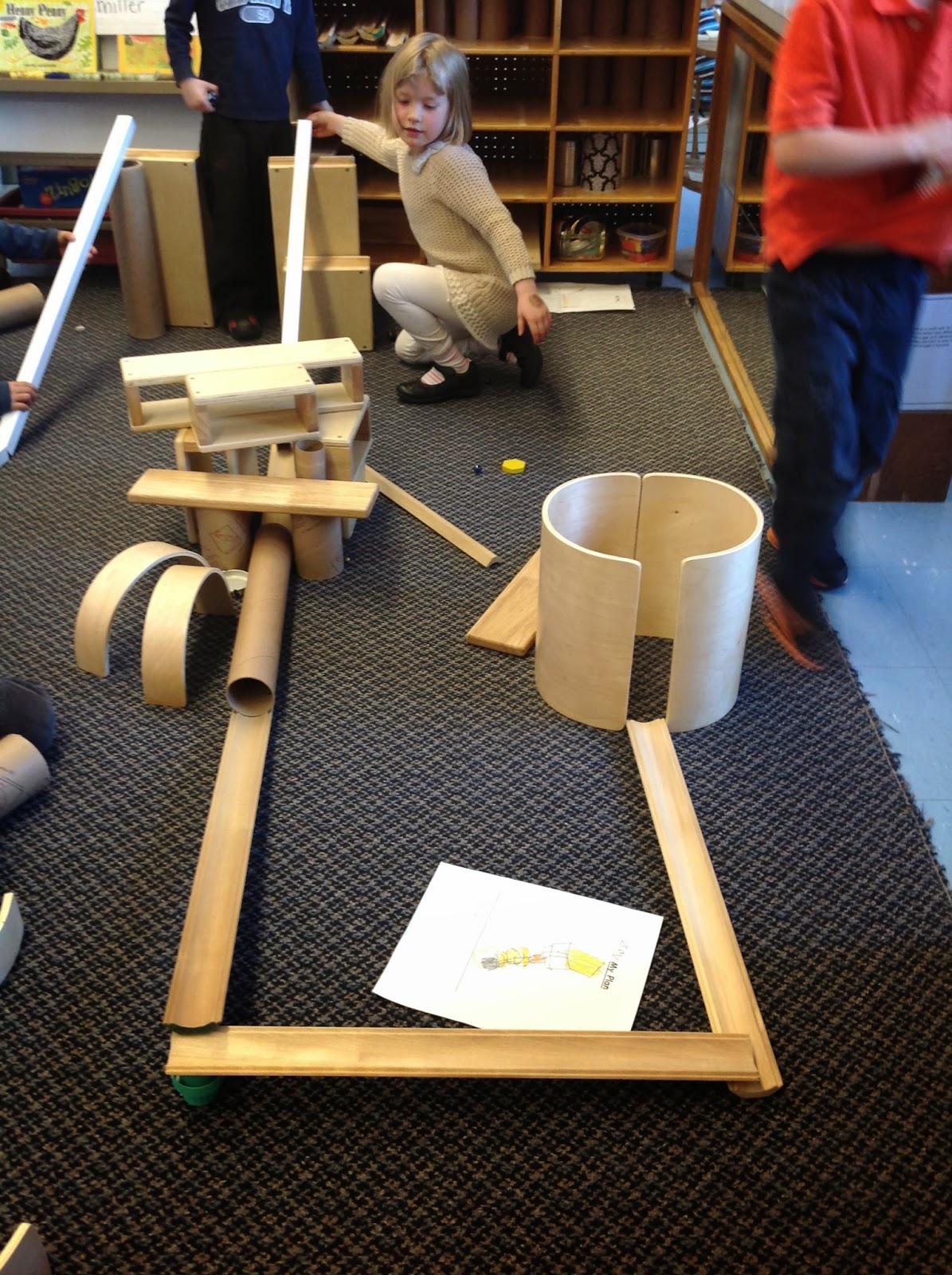 "We need another ramp here so the ball can roll down!" F. D.

F. D. added a plastic lid at the first turn. Once again they tried releasing a few different balls down the ramp. The balls kept roller off the second ramp not making the turn. Z. G. and B. P. Grabbed some cylinders and blocks and decided they needed to make a wall to keep the balls from getting off the second ramp. 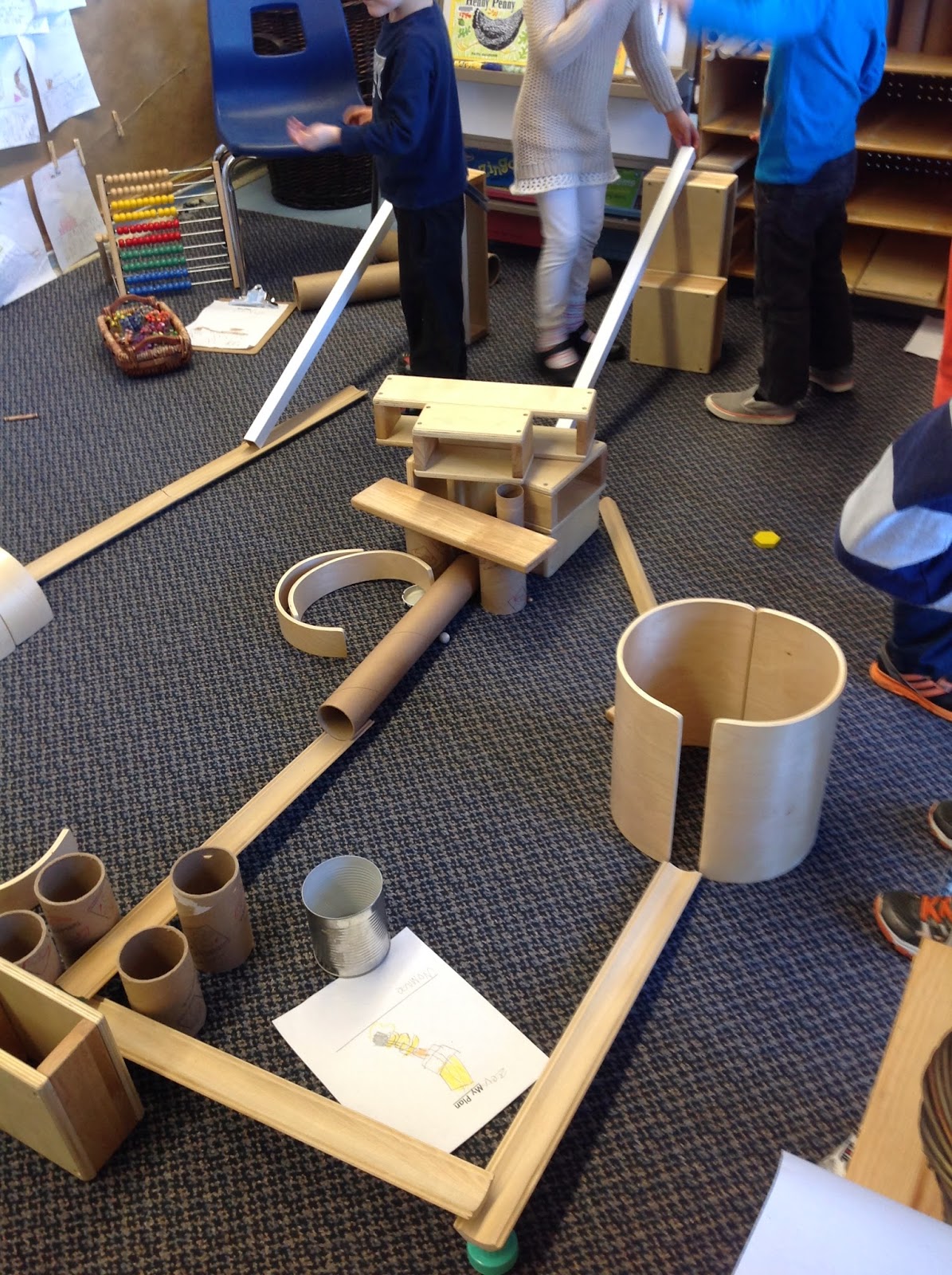 The wall seemed to do the trick. They also decided to add another lid at the second corner in order to make another ramp to allow the balls to go into the wood dome. After a few attempts, F. D. noticed a problem.

She was referring to the middle cove molding that joined the two corners. Since they used lids of the same size, the path was parallel. They revised again. 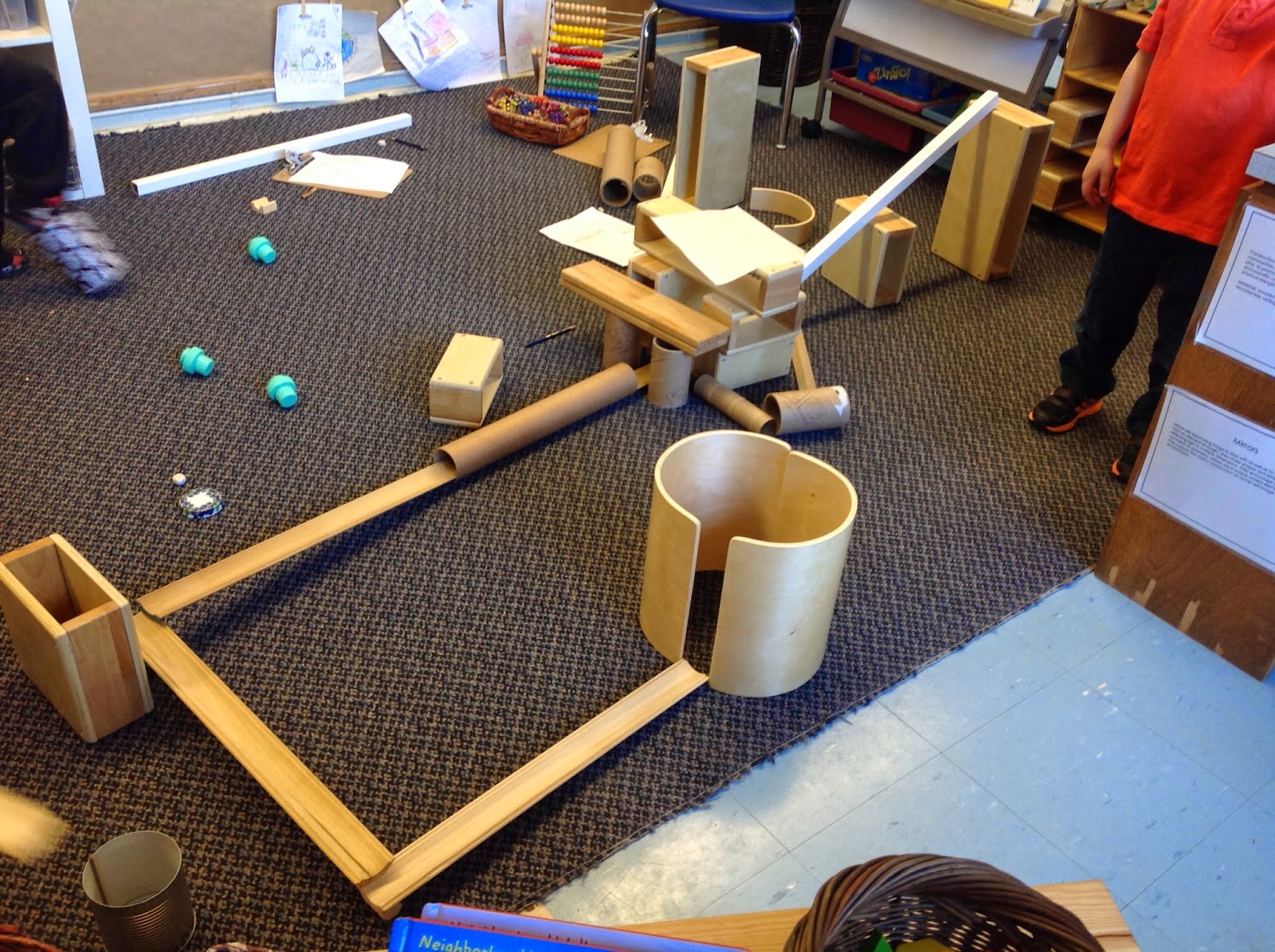 They decided they needed to make a ramp there as well but needed something shorter than the lid. As they searched, I told them they can look in the 3 D figures basket. Maybe we would find something there. They settled on using a hexagonal prism. They laid it sideways and placed the cove molding over top.


P. I., A. F., R. S., and M. O. were also inspired to create this creation. They tested it out many times having trouble with different balls flying off the track, or the bigger marbles not having enough speed to make it to the second ramp. "We need to make the ramp higher so the ball gets more speed!" P. I. 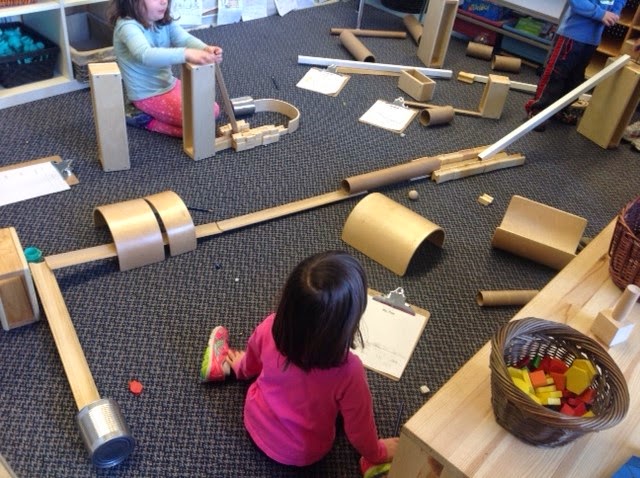 Our ramps and pathways investigations continue to motivate and enthrall students. They love to share their work which builds on the learning knowledge of other students allowing for more intricate structure designs.

"Of course, we want children to acquire correct knowledge and be able to use it. Yet we cannot ignore children's many misconceptions. Erroneous ideas are important because a child's own particular wrong ideas are necessary for that child to reach certain correct ideas. All of us, children or adults, know better and more solidly what is correct when we know what is not correct."
(Ramps & Pathways: a constructivist approach to physics with young children, pg. 2)
Posted by Anamaria Ralph TDSB OCT at 18:00

Email ThisBlogThis!Share to TwitterShare to FacebookShare to Pinterest
Labels: Play Based Learning

Anamaria Ralph TDSB OCT
I am a TDSB Kindergarten Teacher who feels privileged to share the journey of learning alongside the children in my class. Kindergarten is an exciting adventure where many wonders, explorations, and investigations take place. I am passionate about inquiry and play based learning, and am greatly inspired by the Reggio approach to learning. I continue to learn and practice such approaches in my classroom. Please use this blog as a window view into our classroom learning! I hope it may lead to new discoveries and inspirations! Thank you for visiting!